The semi-trailer axle is mainly composed of four major parts: 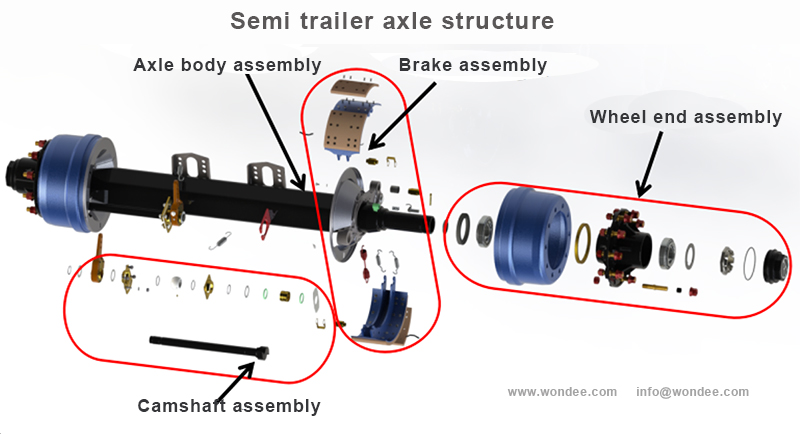 This kind of axle is one of the most widely used semi-trailer axle series in the world. The main markets for American Series axles are the Americas and China. They are also used in other regions such as Asia, Africa, and some European countries and regions.

Medium duty and heavy duty axles with a rated load of 13 tons ~ 20 tons generally use square axle beams of 150×150mm, or round axle beams with an outer diameter Φ146mm.

According to the different using requirements and the special design of some parts, American series axles can be divided into:


The flange’s outer surface of this axle’s brake drum is located on the inner surface of the hub flange. For inboard drum axles, when maintaining and replacing parts of the brake system, it is necessary to unscrew the hub cover and remove the bearing locknut, so that the tire, the wheel hub, the brake drum, the bearings, etc. can be removed together from the beam for maintenance and replacement.

The flange’s inner surface of this axle’s brake drum is located on the outer surface of the hub flange. For outboard drum axles, when maintaining and replacing brake system parts, it is only necessary to unscrew all wheel nuts and remove tires and brake drums.

The outer diameter of this series axle’s brake shoe is Φ311x190mm, which is much smaller than the diameter of common axle brakes. This axle can be matched with smaller wheel rims and tires, effectively reducing the body height of semi-trailers, and is widely used in car transportation semi-trailers and low bed semi-trailers.


The axle's beam is full dropped, which can reduce the trailer body height.


The centre concave structure of this axle’s beam can effectively avoid the interference between the axle beam and the transmission axle.


Compared with the drum series axles, the disc brake series axles have a simpler structure, and the brake friction surfaces are directly exposed to the air, and the heat dissipation is better, which effectively avoid the phenomenon of thermal degradation. Both sides of the brake disc bear compressive stress and have good crack resistance under continuous braking. The left and right disc braking forces are more balanced, and the braking system responds faster. Therefore, the safety of the vehicle is improved.


An idler axle does not have braking unit and only plays the role of supporting and bearing. This axle is usually used in low-speed and light load environment.


The main markets for Europe series axles are European countries. They are also used in other countries such as the Middle-east countries, African countries and some Asian countries.

This series of axles have the following characteristics: the axle beam adopts a reinforced square section steel beam, and the axle beam is designed with an outward inclination angle of 1 °, which can effectively ensure the loading of the axle. All parts of the brake shoe have no left and right distinctions and can be interchanged freely. The brake shoe and the support pin use a bayonet link, which is convenient for installation, self-compensation, quick return, and good braking effect. On the axle spindle two bearings, one large and one small, are installed, which is convenient for installation and maintenance.

This series of axles can be divided into the following three categories:

Semi-traile axles in different regions in the world have their own characteristics. According to their market characteristics, there are many other series axles. A few examples are as follows:

The rated load capacity of this type axle is generally 13 tons, and the main markets are South Africa and its surrounding countries.

The rated load capacity of this type axle is generally 13 tons, and its hubs and brake drums are specially customized. The main markets are South American countries.

The rated load capacity of this axle is 13 tons, 14 tons and 16 tons. The main markets are Thailand and Southeast Asian countries.

The rated load of this axle is 13 tons, 14 tons and 16 tons. The main markets are Southeast Asian countries.